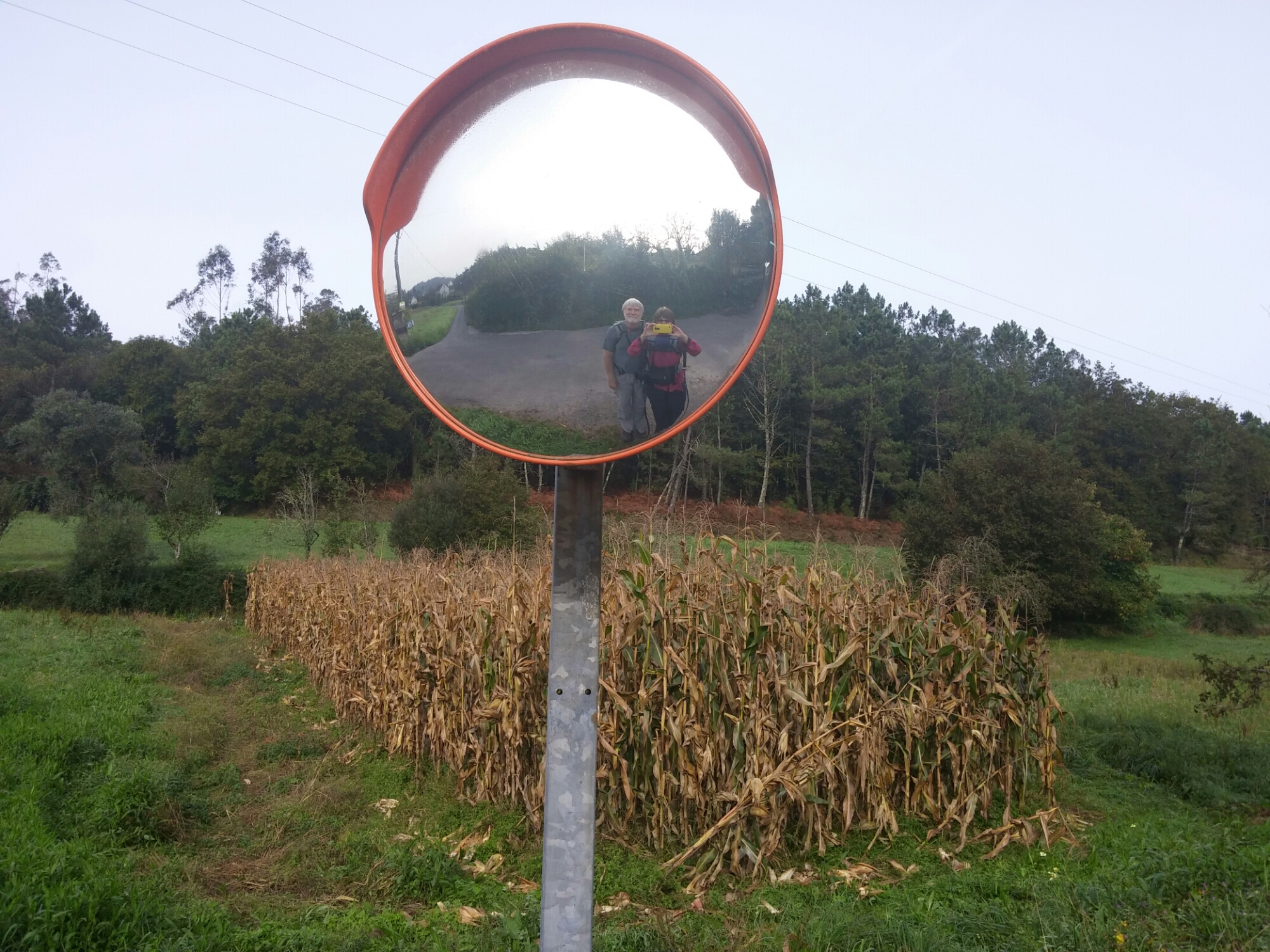 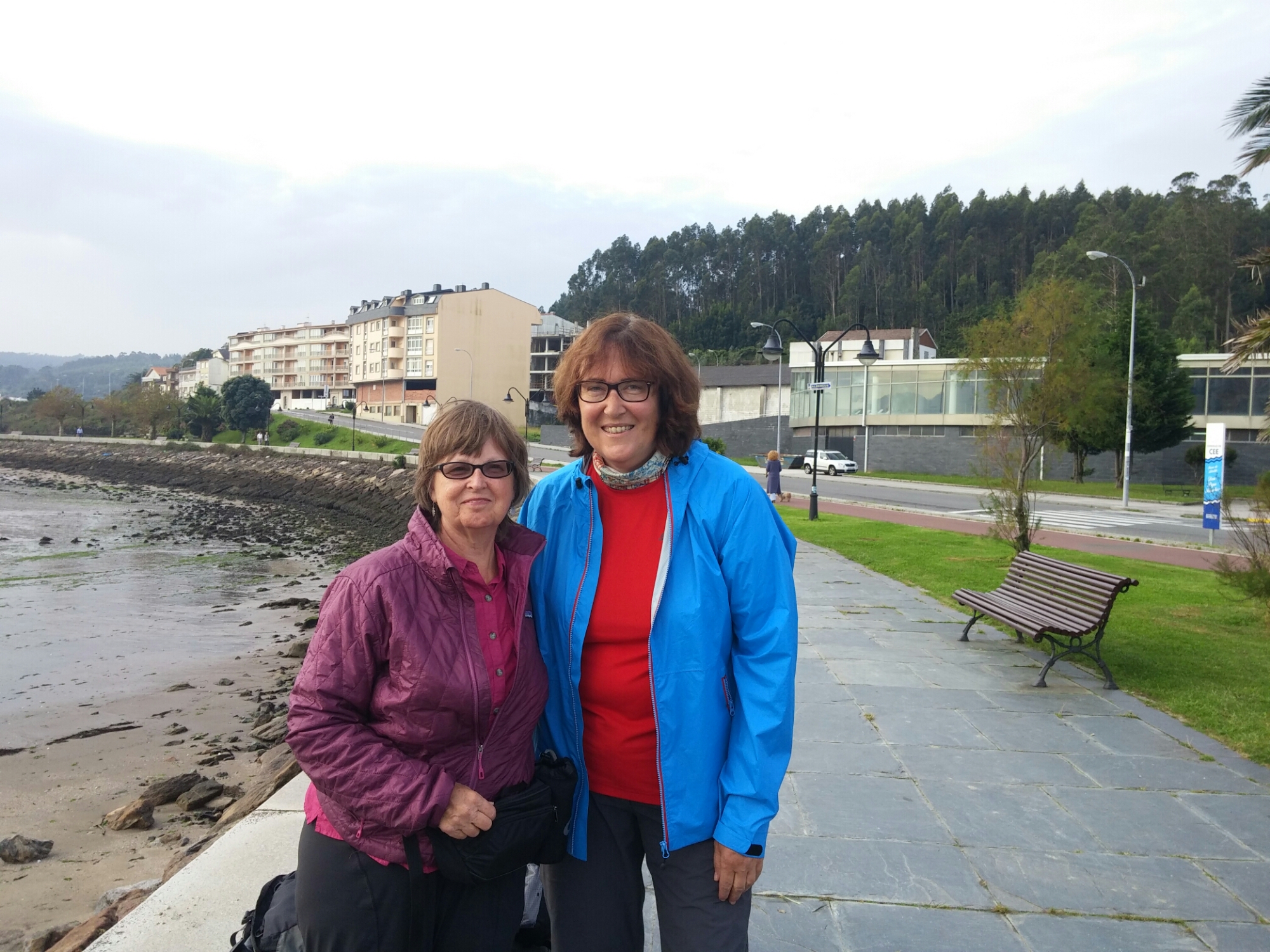 Charlie. We met Linda at the albergue in Negreira. The next day we shared a bus and taxi ride to Cée where this picture was taken. We all wanted to get to the ocean for the good weather. We walked from Cée to our lovely beach hotel half way to Finisterre and she walked on to Finisterre. We stayed at the beach hotel two nights then walked in to Finisterre this morning. We are now staying in the same hotel as Linda. She just stopped in the common area, where I am writing this, to say hello. 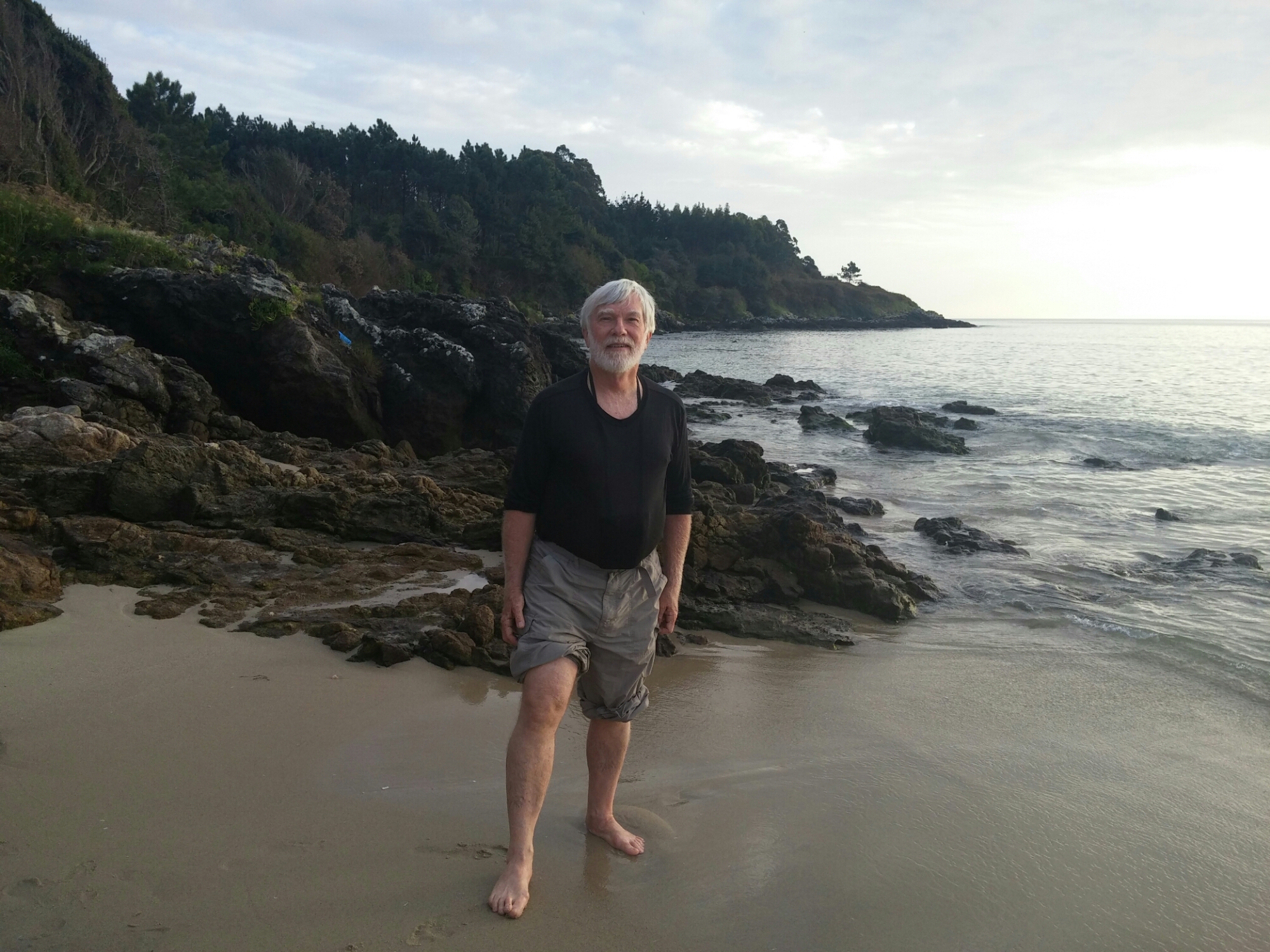 The beach by our hotel. The water is quite warm so we were able to walk through the surf. 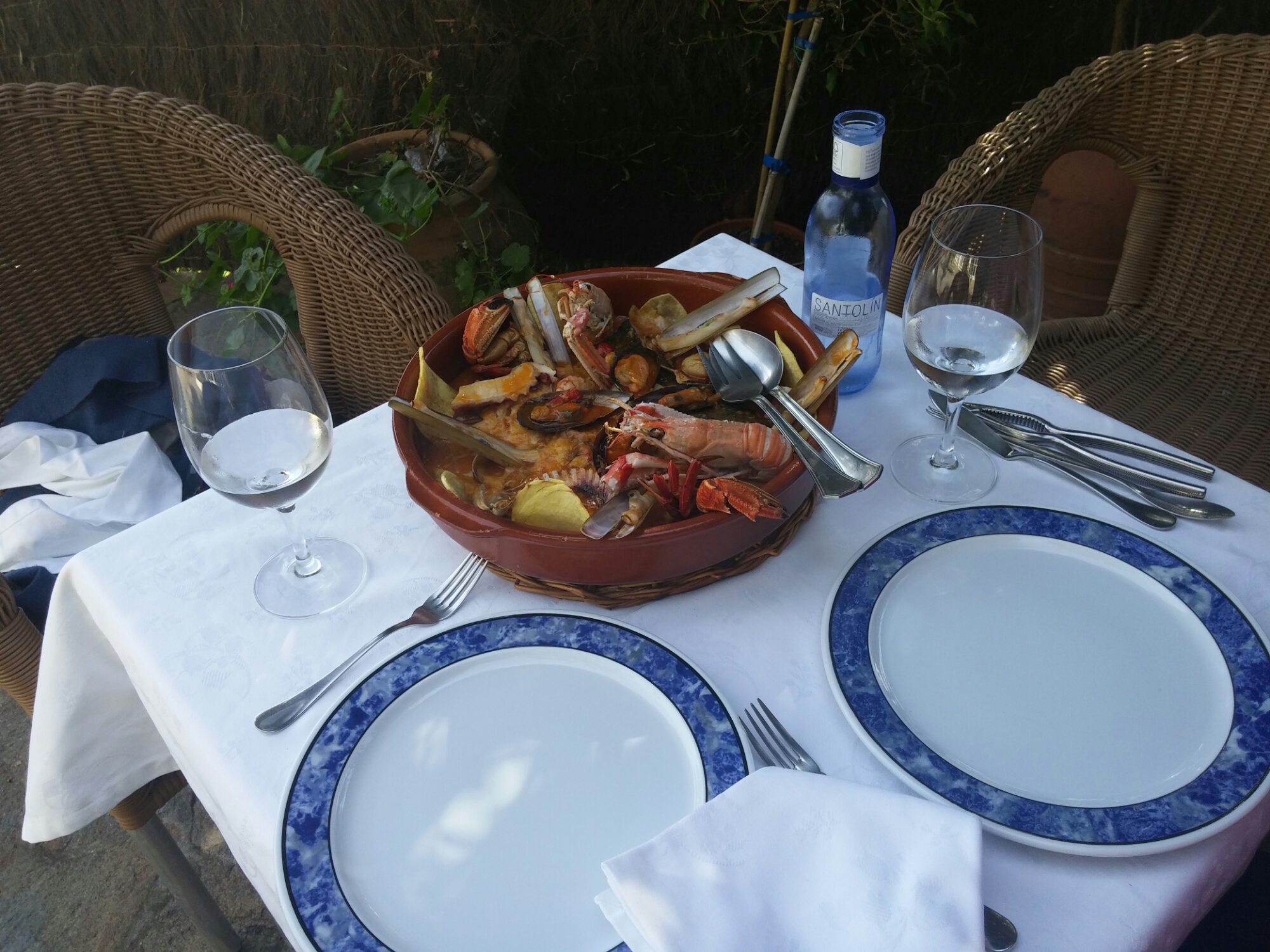 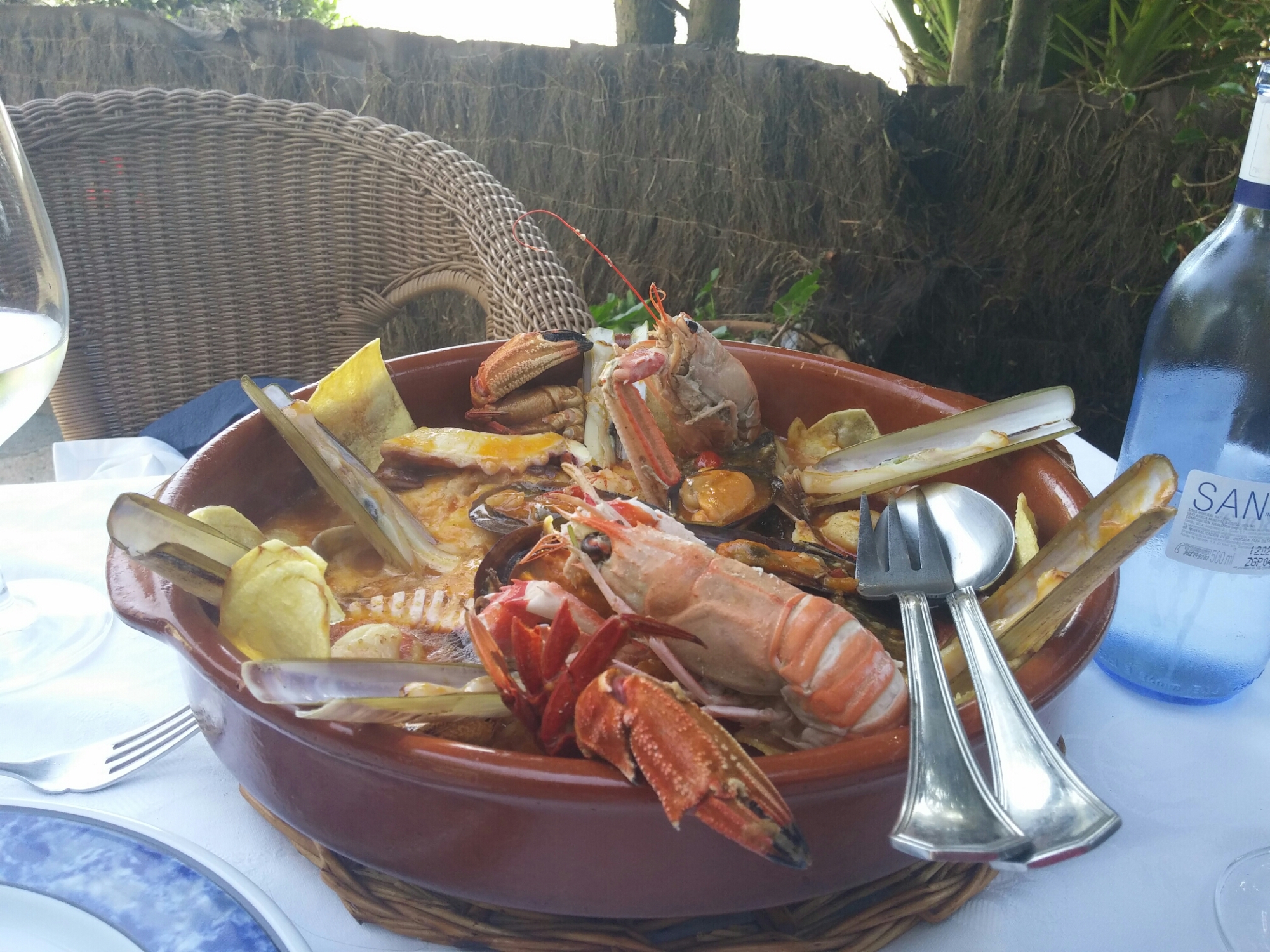 It was as good as it looks. We ate on the patio in the amazing warm weather we are having. 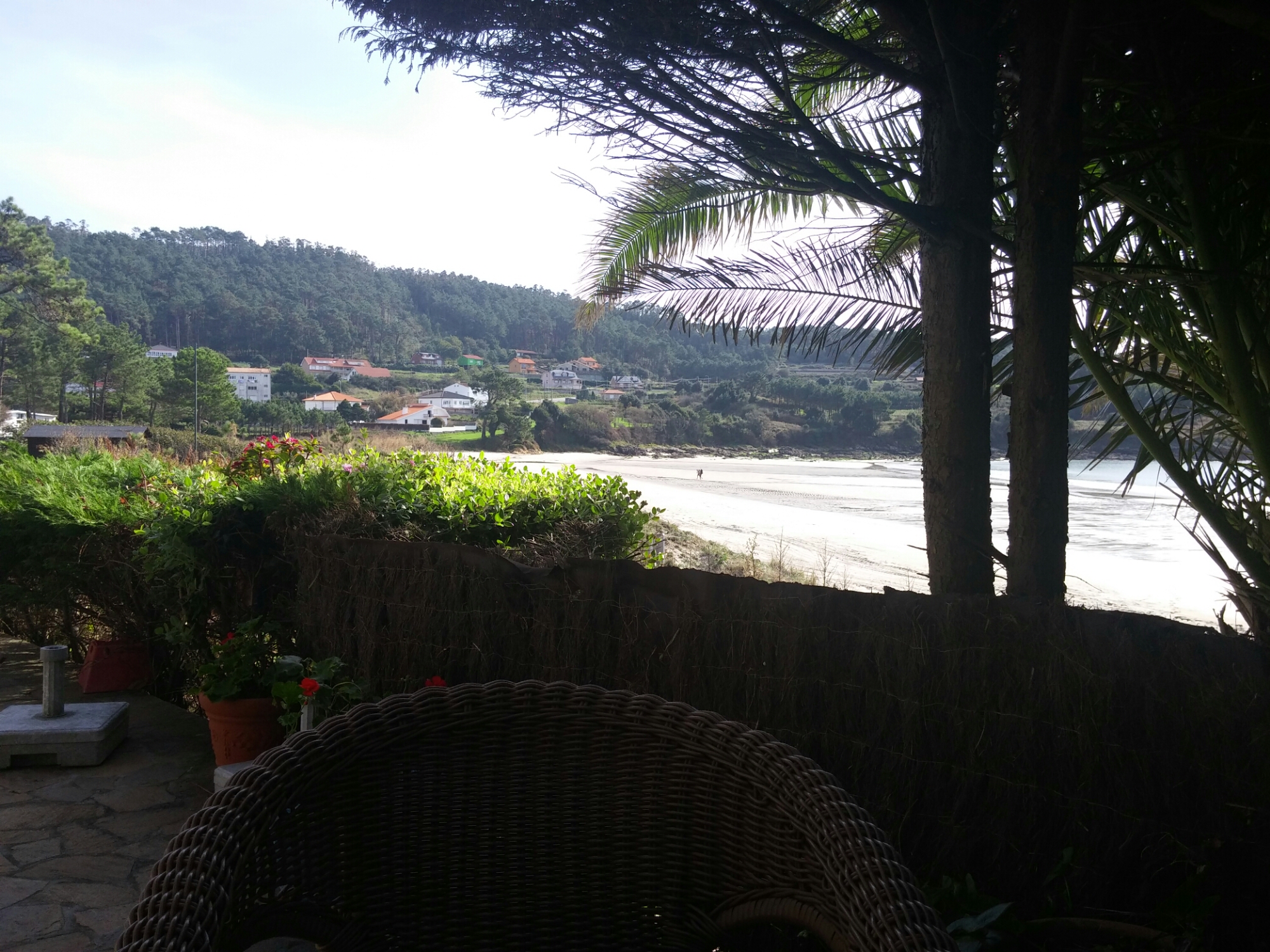 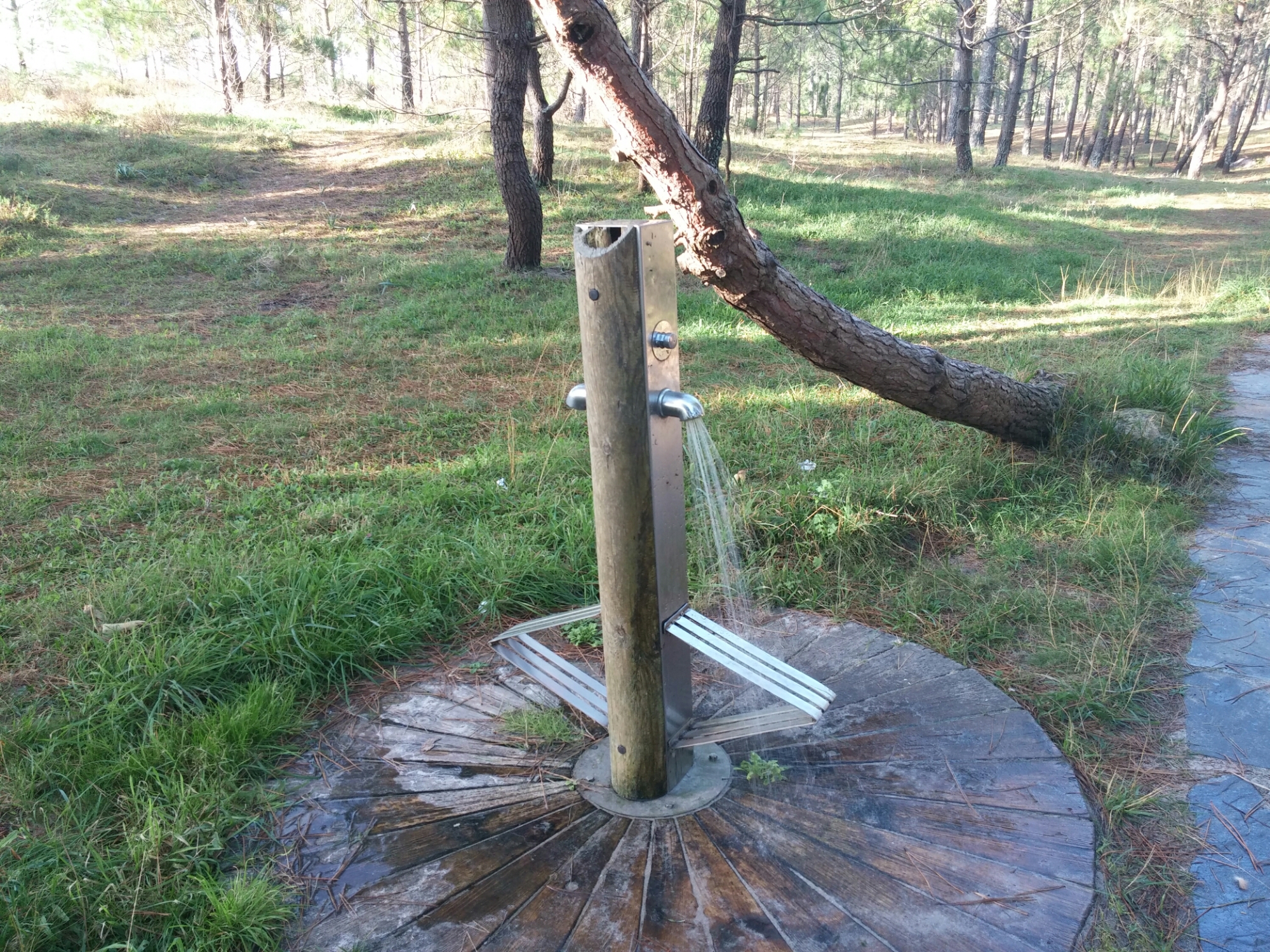 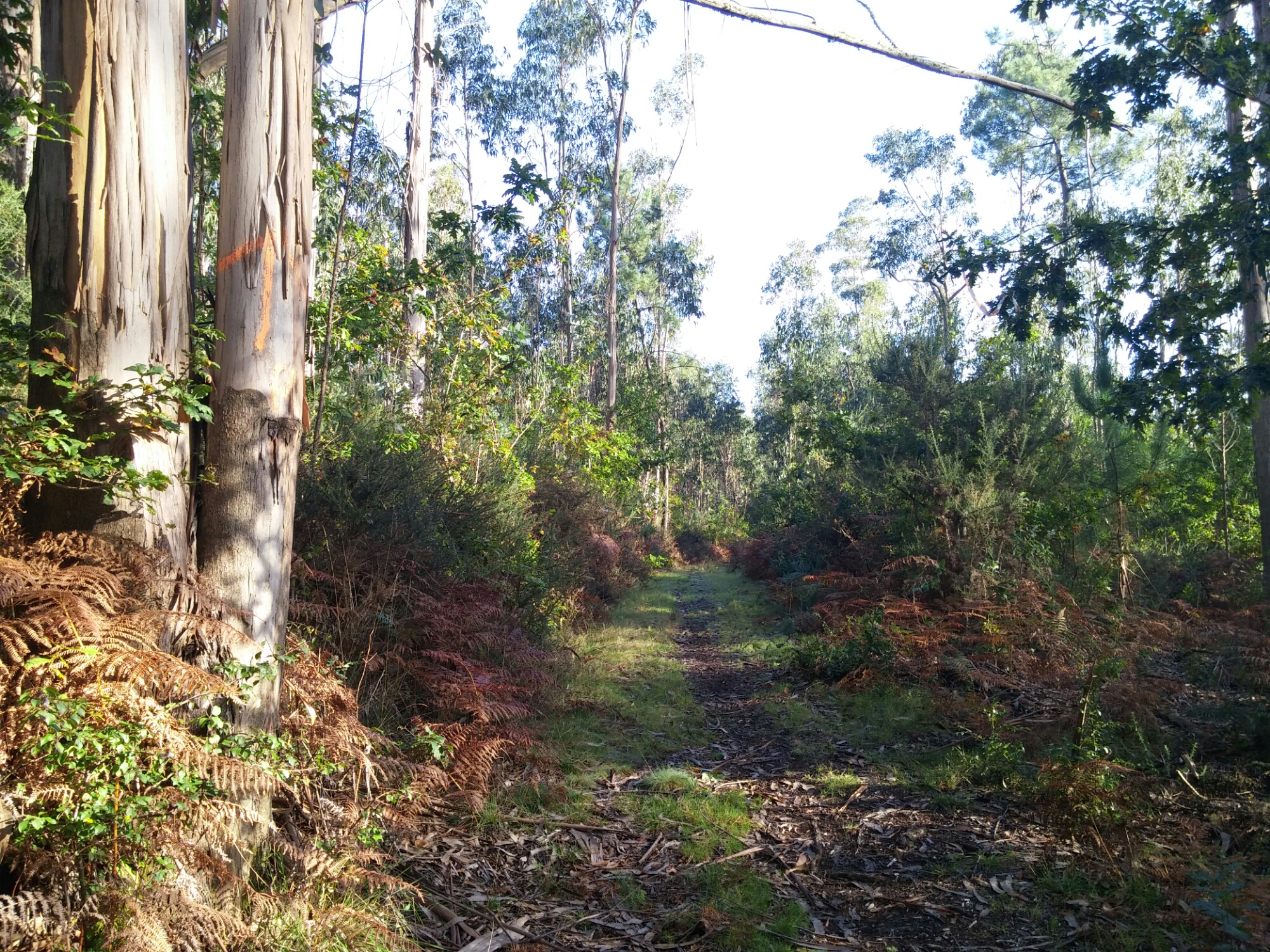 …  (we’re lost) we said to the man spray-washing his driveway. He smiled and gave us excellent directions back to the Camino. We had been lost the previous hour and a half (having just realized it about 40 minutes before) and were relieved to learn we’d found our way back to within a half mile of the Camino.

Here’s what happened. We were merrily following the yellow arrows when we started seeing light orange arrows mixed in going the same path. Being typical human beings we made up a story to explain it. We decided they wanted to add more markers and were using a different new color for the Camino Finisterre (or maybe they had run out of yellow paint). We were convinced these were Camino markers mainly because they stayed alongside the yellow markers for so far.

Then we came to a point where an orange marker took a slightly different path than the yellow, but very close. The yellow marker was really faded at that fork. We consulted our Brierly guidebook at what we thought was this fork and he said “Ignore old arrows pointing straight on” so we followed the new orange ones. We started going deep into a forest. There continued to be lots of orange arrows. It was a very well marked path. After about 45 minutes or an hour we started questioning why we hadn’t already come to a bar (named Os Arcos) on Brierly’s map. Charlie checked our location using Google maps on his phone and we saw we were off course, heading away from the town we expected. The path we were on didn’t show up on Google maps so it looked like we were in the middle of nowhere. The forest was very dense with underbrush so there was no way to walk through it without a path. We realized we had no choice but to backtrack.

Luckily after about 15 minutes we found another forest path that looked like it might lead to the right town. We followed it and eventually found the man washing his driveway. He directed us to a bar and told us to turn right there and then we’d be on the Camino. When we got to the bar we were happy to find it was the Os Arcos, the bar we had been expecting to see when we were lost and going in exactly the opposite direction.

It was so great to get back to the yellow arrows. From now on, nothing but yellow!

So we added about two extra miles to our day, making it 9.5 miles instead of 7.5. On the bright side we upped our daily average a bit.

Looking back we think we got off onto some kind of hunting path (we saw some shotgun shells). But that might just be another story we made ourselves believe.

The photo at the top is our well-marked-with-orange-arrows forest path. (Can you find the orange arrow?)

Below is a screen shot of our track today. The straight yellow line is the part of the Camino we missed, más o menos. The part in red and blue above that yellow line is where we were lost. 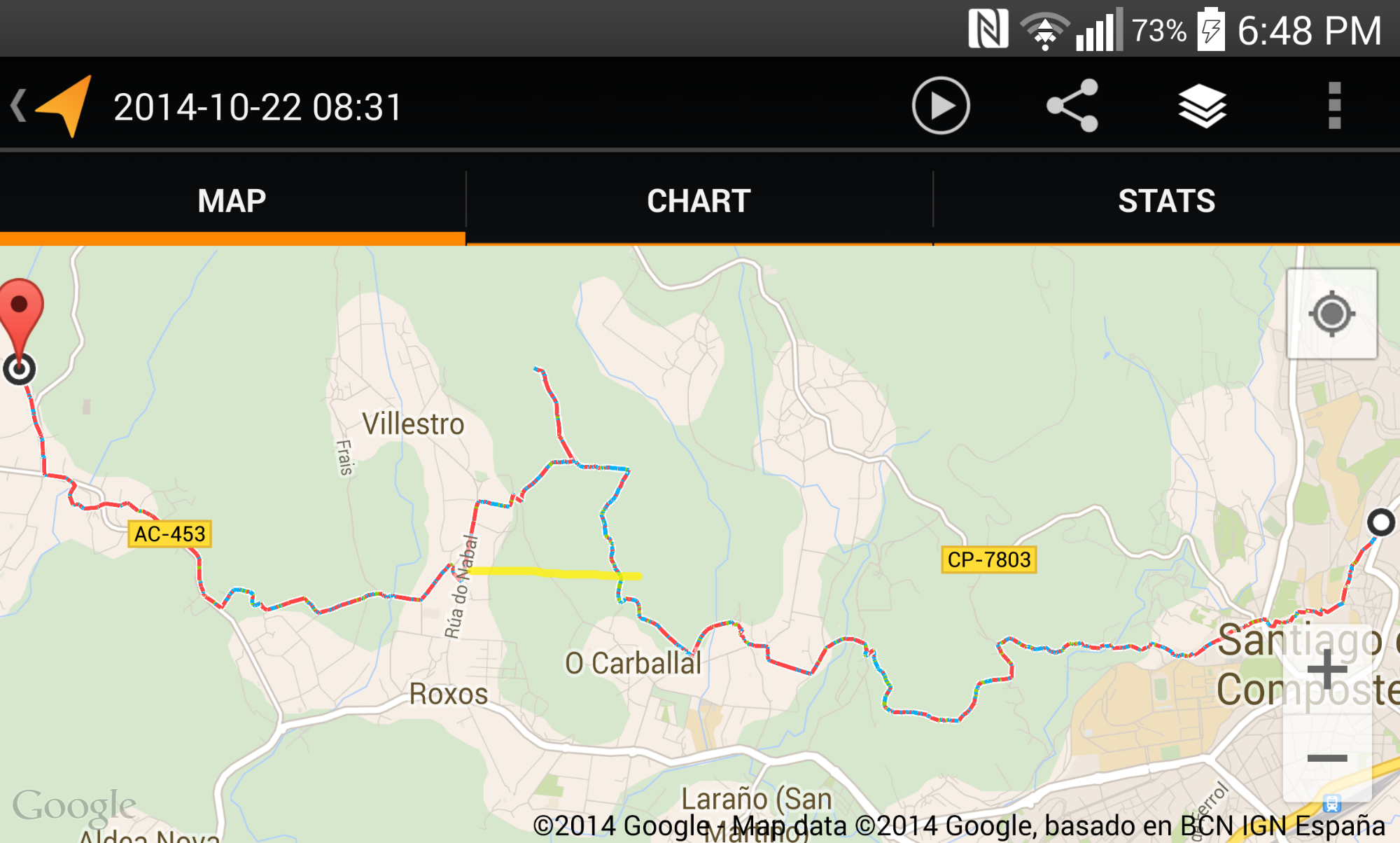 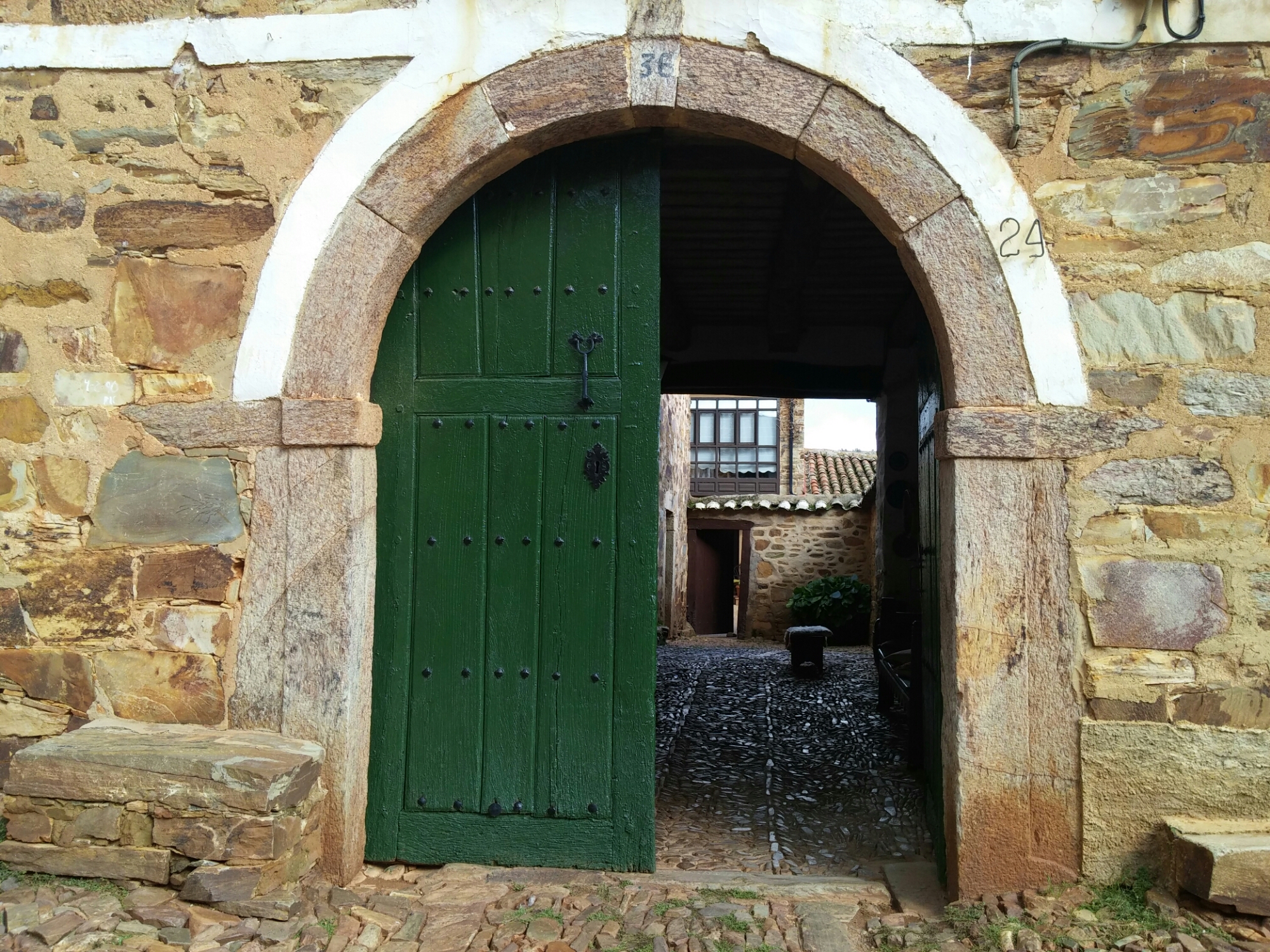 Wynette. Charlie likes taking pictures of doors. I liked this one because one side was open and we got a glimpse inside. This was in a village where most of the doors were green like this one. 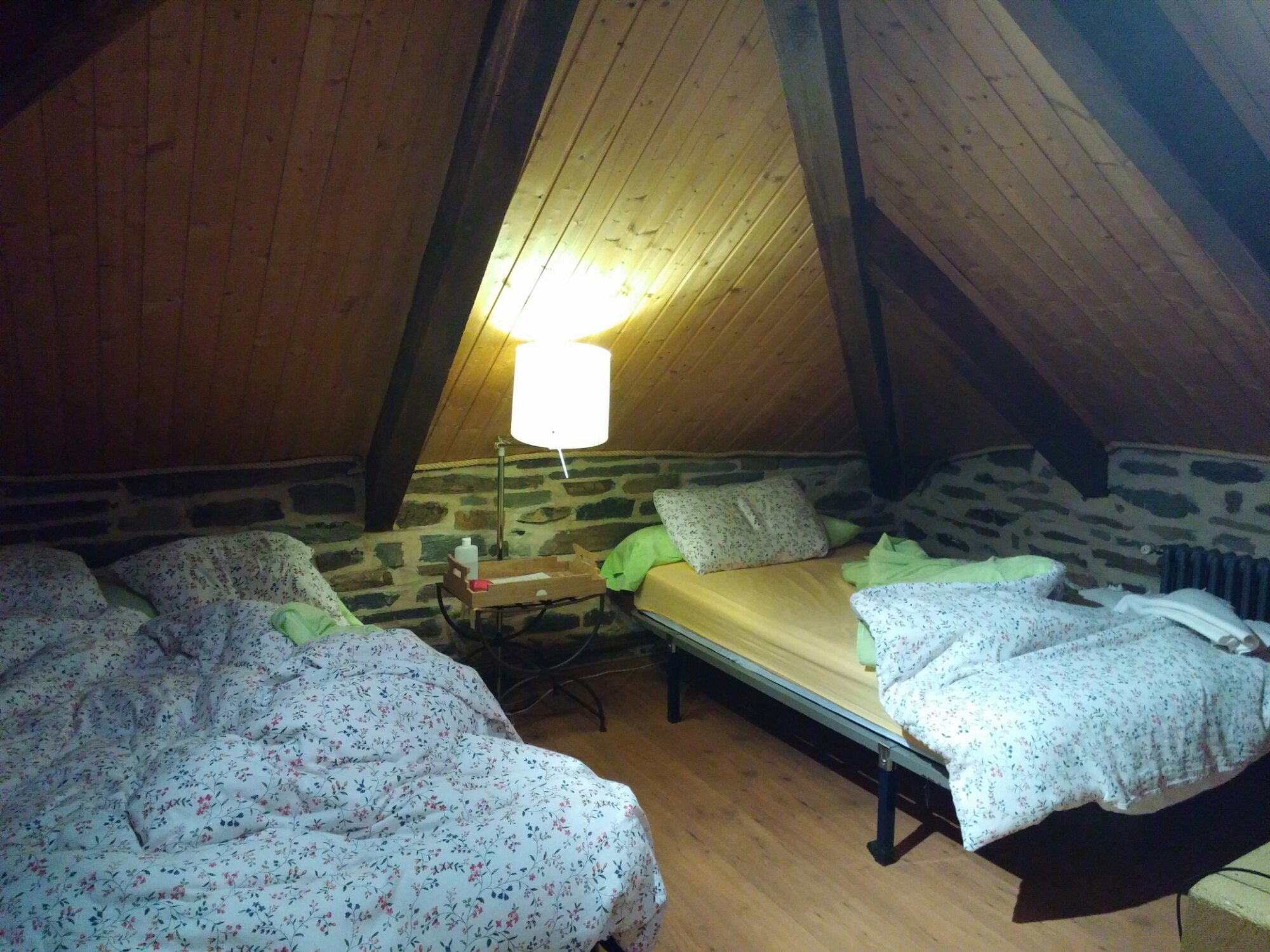 Charlie and Wynette. We had this interesting room in the casa rural La Rosa de Agua in El Acebo. It was the biggest room we have had. 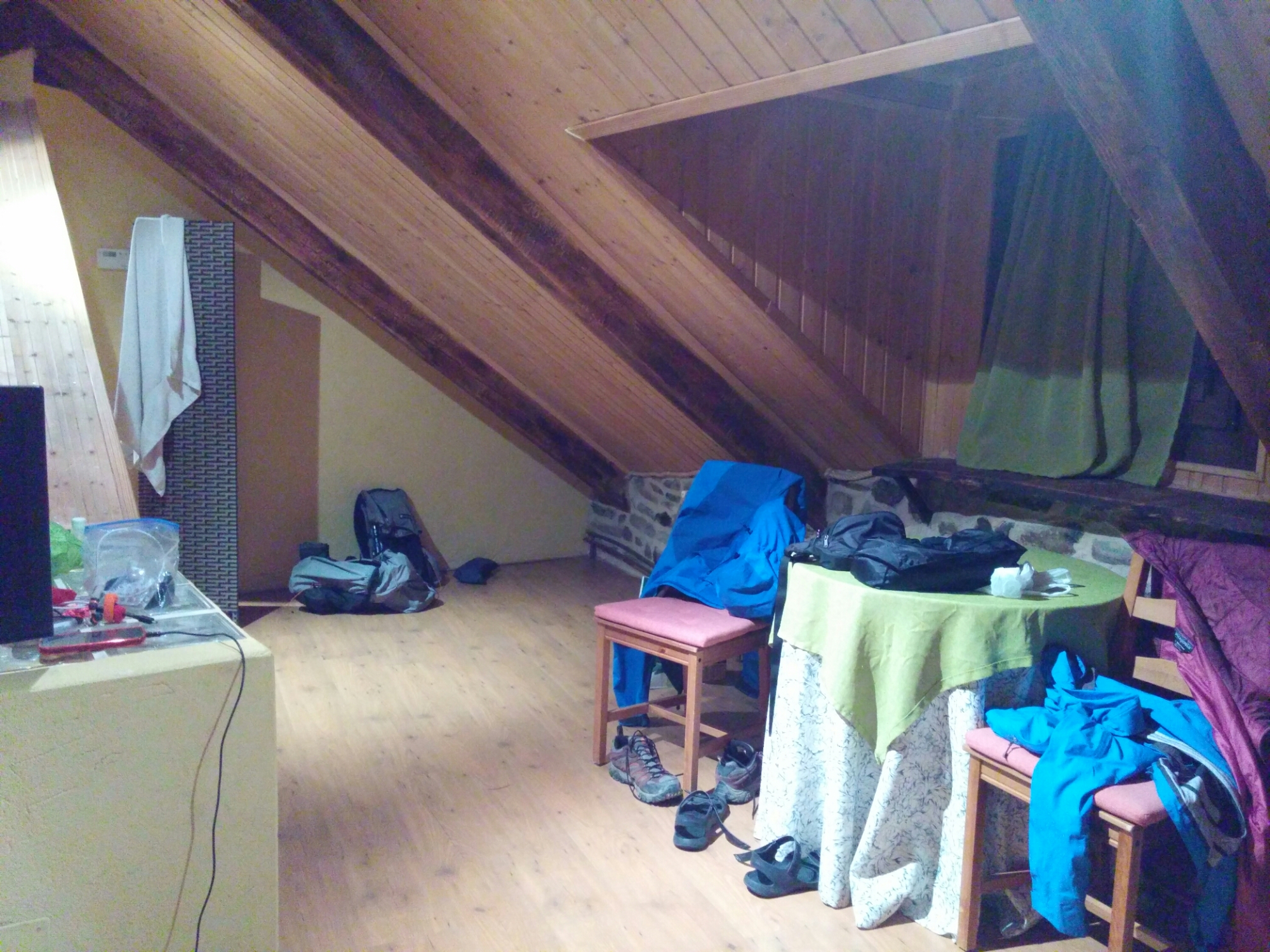 As you can see we spread out. Hard to believe that all fits in two packs. 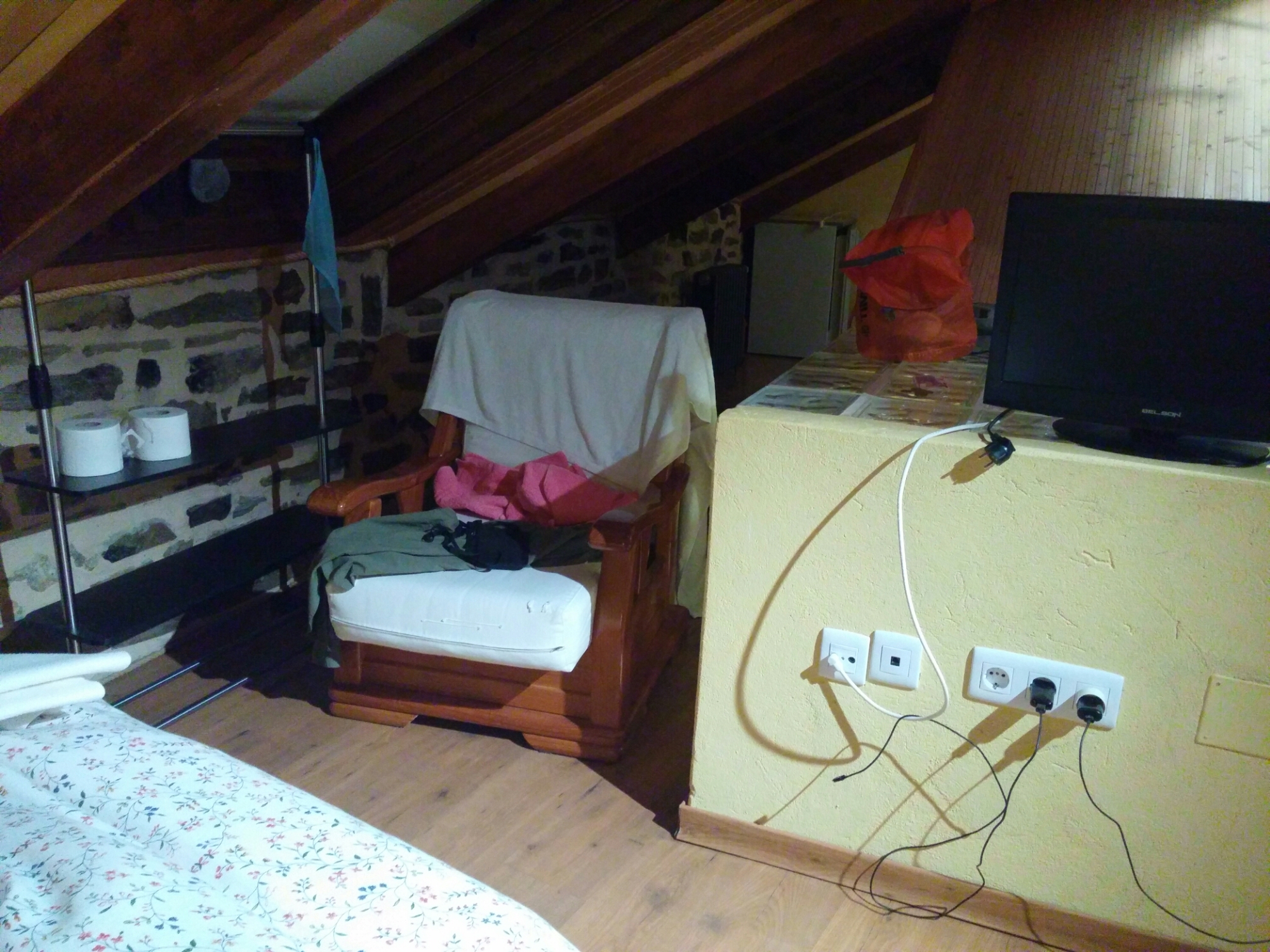 Casa rurals usually provide a kitchen. In this one Wynette made tea, something she has been missing. 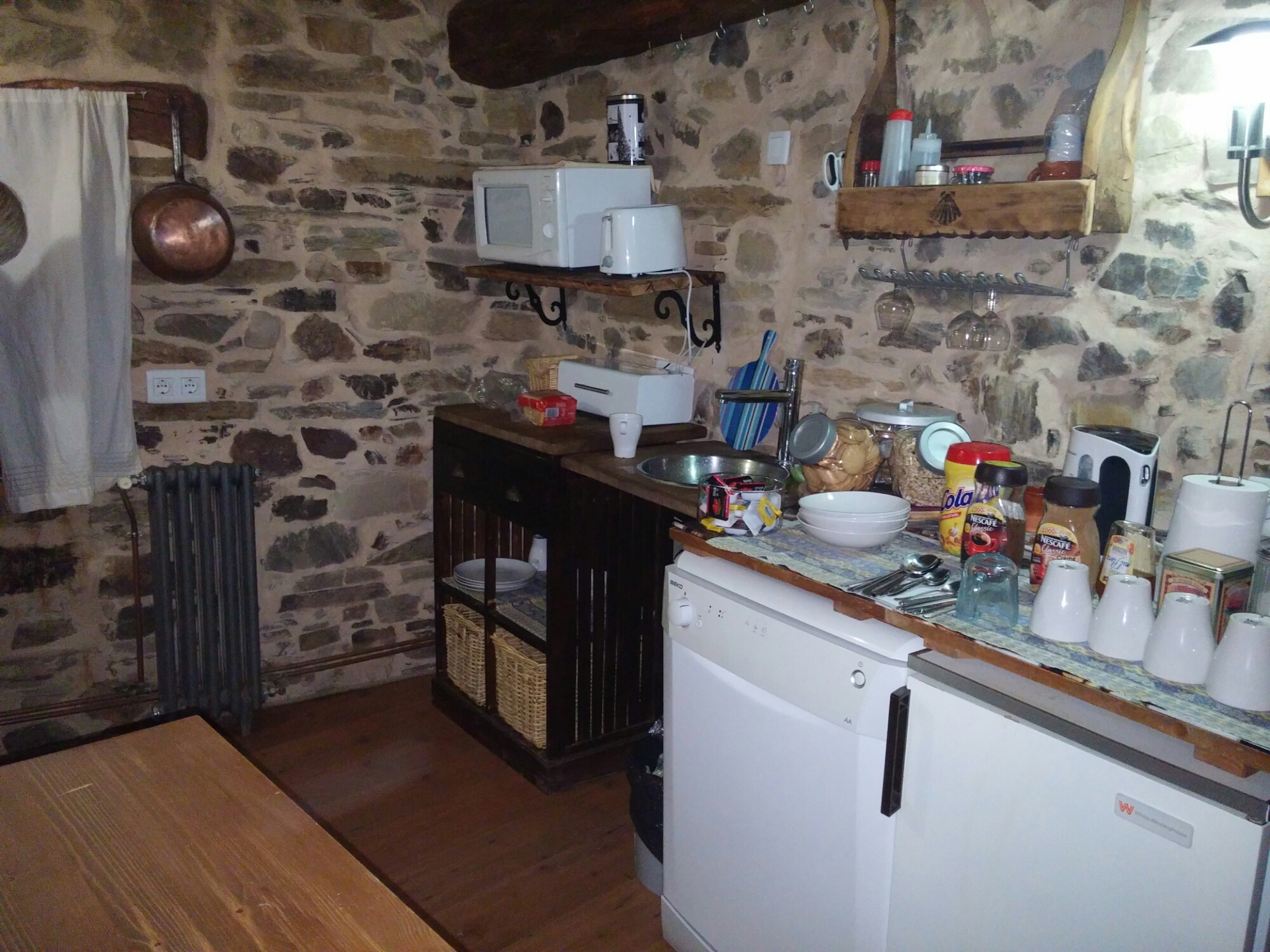 This is a place we stayed last time. We stayed two days then because Charlie was sick. We loved staying here again. The room and kitchen are pretty and comfortable and the young couple who run it are so hard-working and kind. They have a little tienda downstairs. We bought bread and cheese and tomato for a sandwich for dinner. She gave us an onion she had and also squirted our bread with olive oil when she cut it for us. La Rosa del Agua is in the mountain village of El Acebo. Beautiful views from the window and garden. 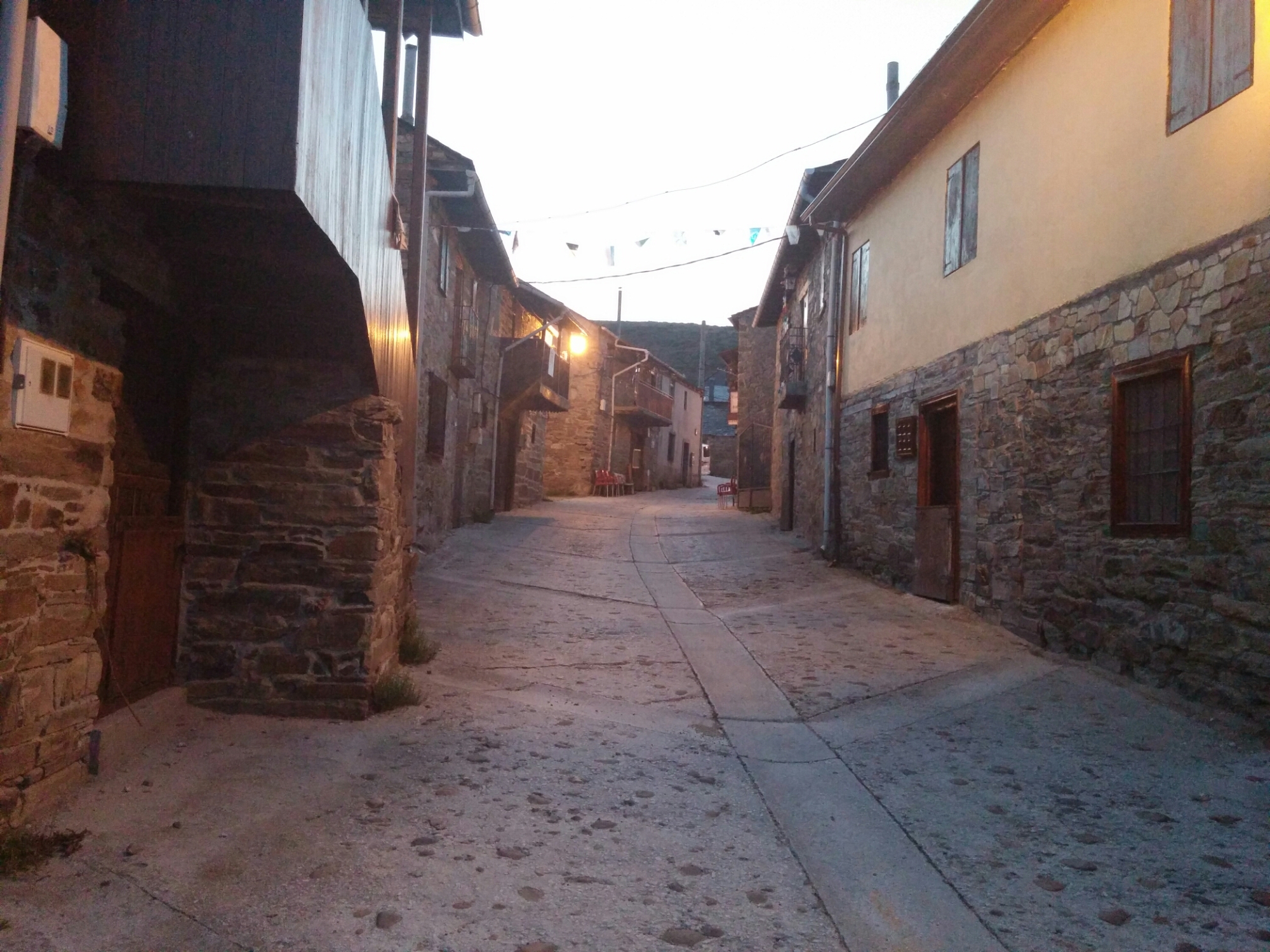 Before sunrise but that is easy to do when sunrise is at 8:40. The streets are lighted even in towns with only one street. Above, leaving El Acebo. Below, the Shadows changed hue in the electric light. 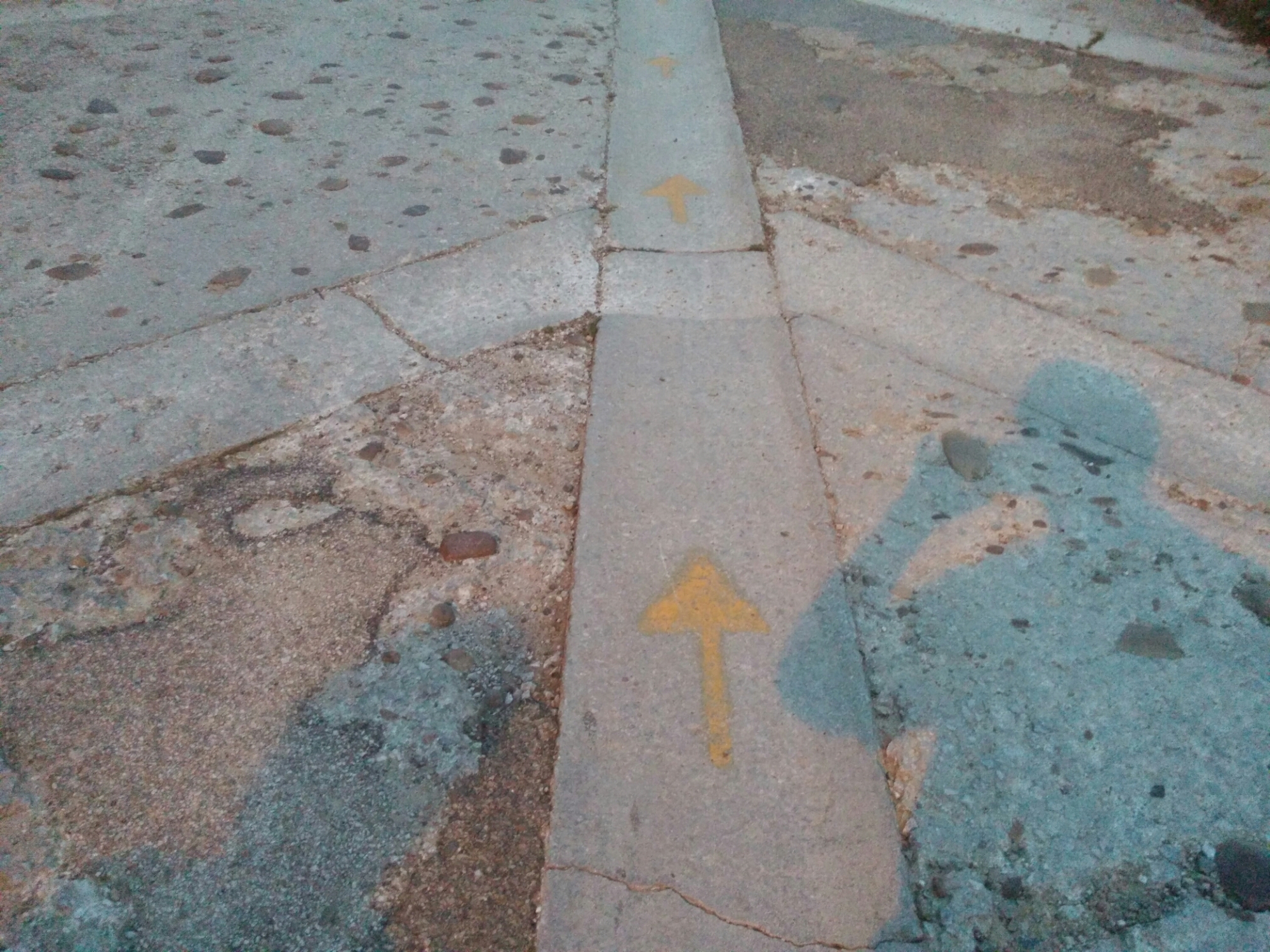 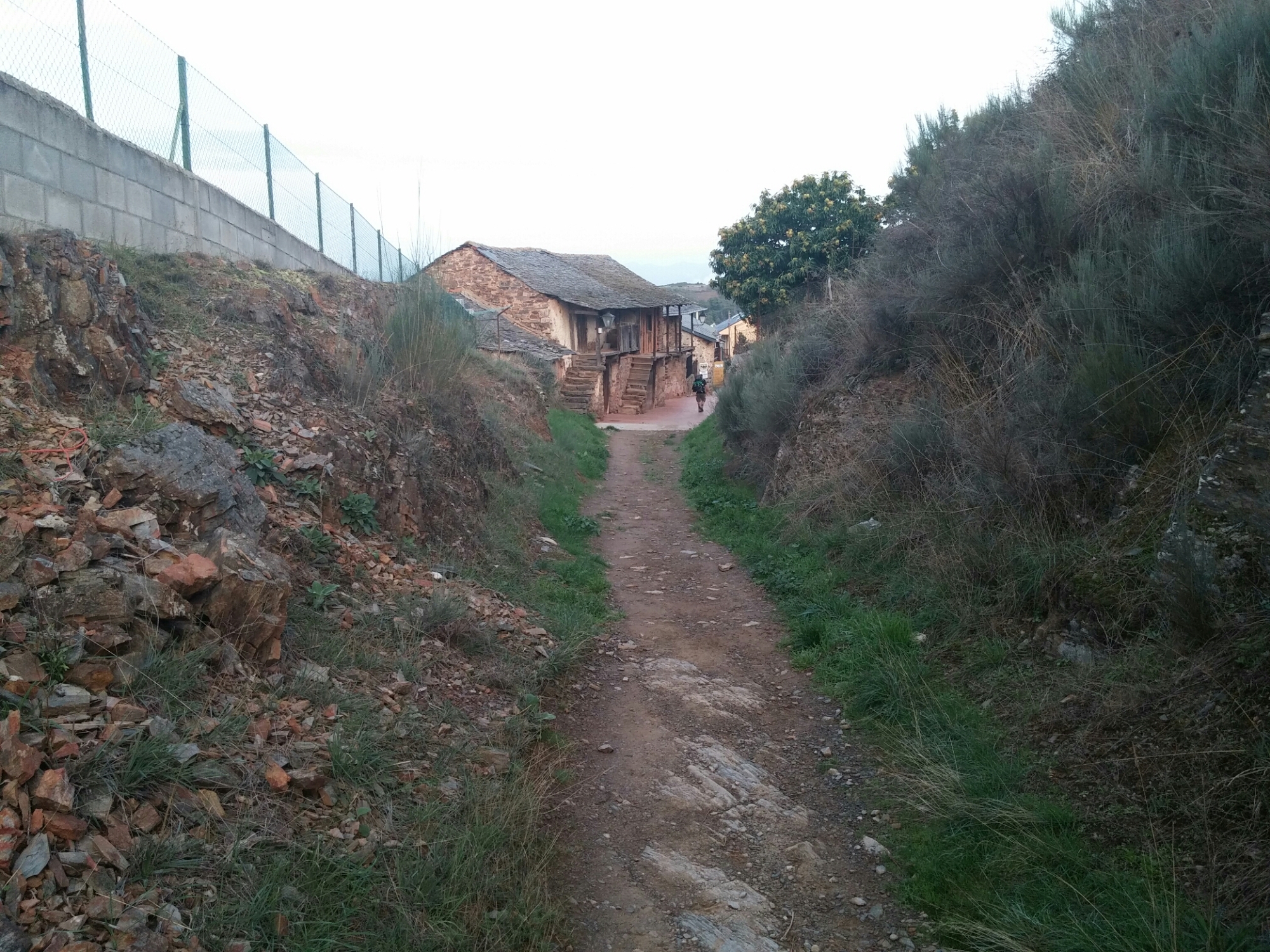 The trail opens up into the main street (pretty much the only street). The village is in pretty good shape with many of the old buildings restored,  like this casa rural. 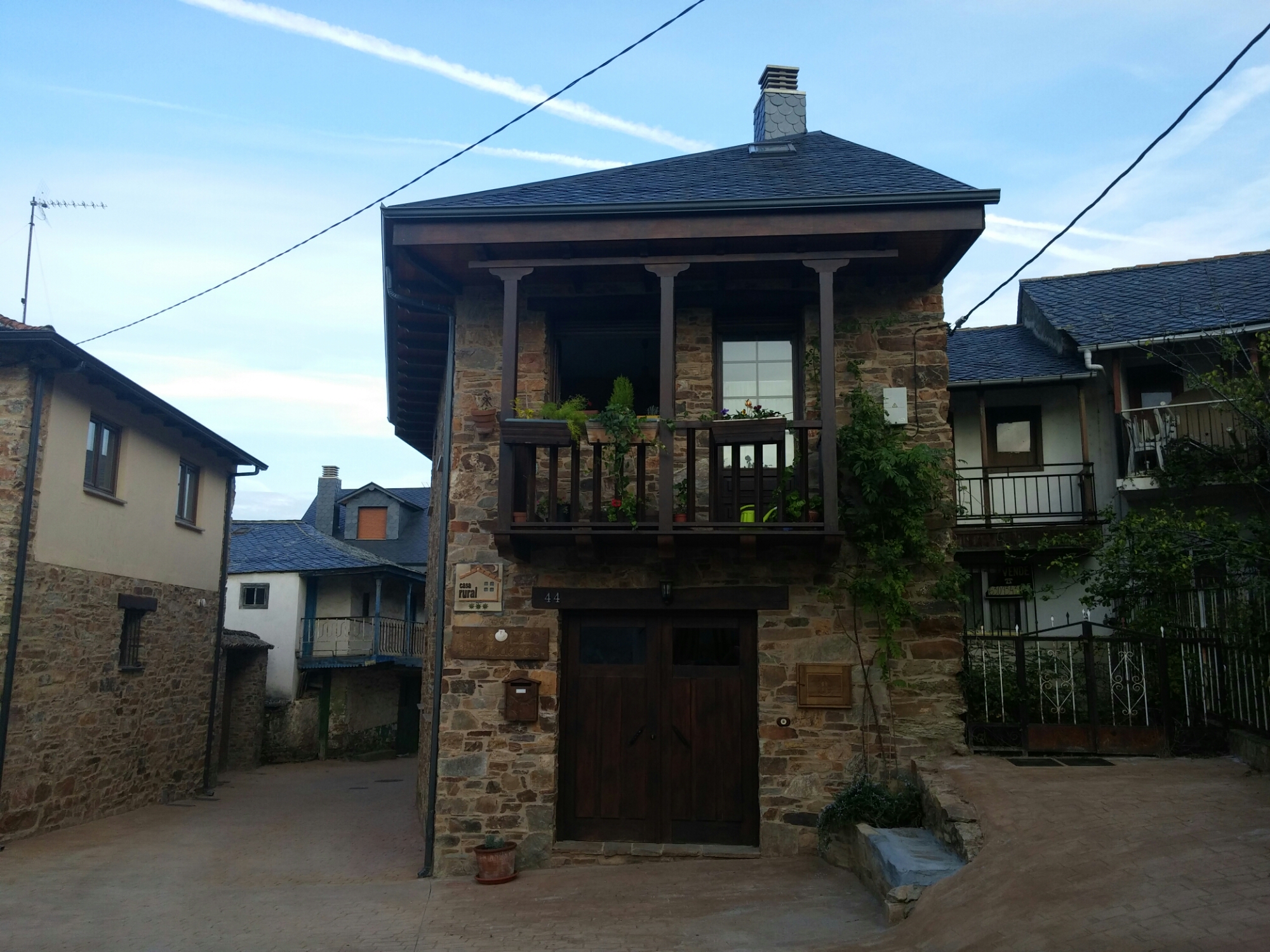 But the unrestored doors are the most interesting. 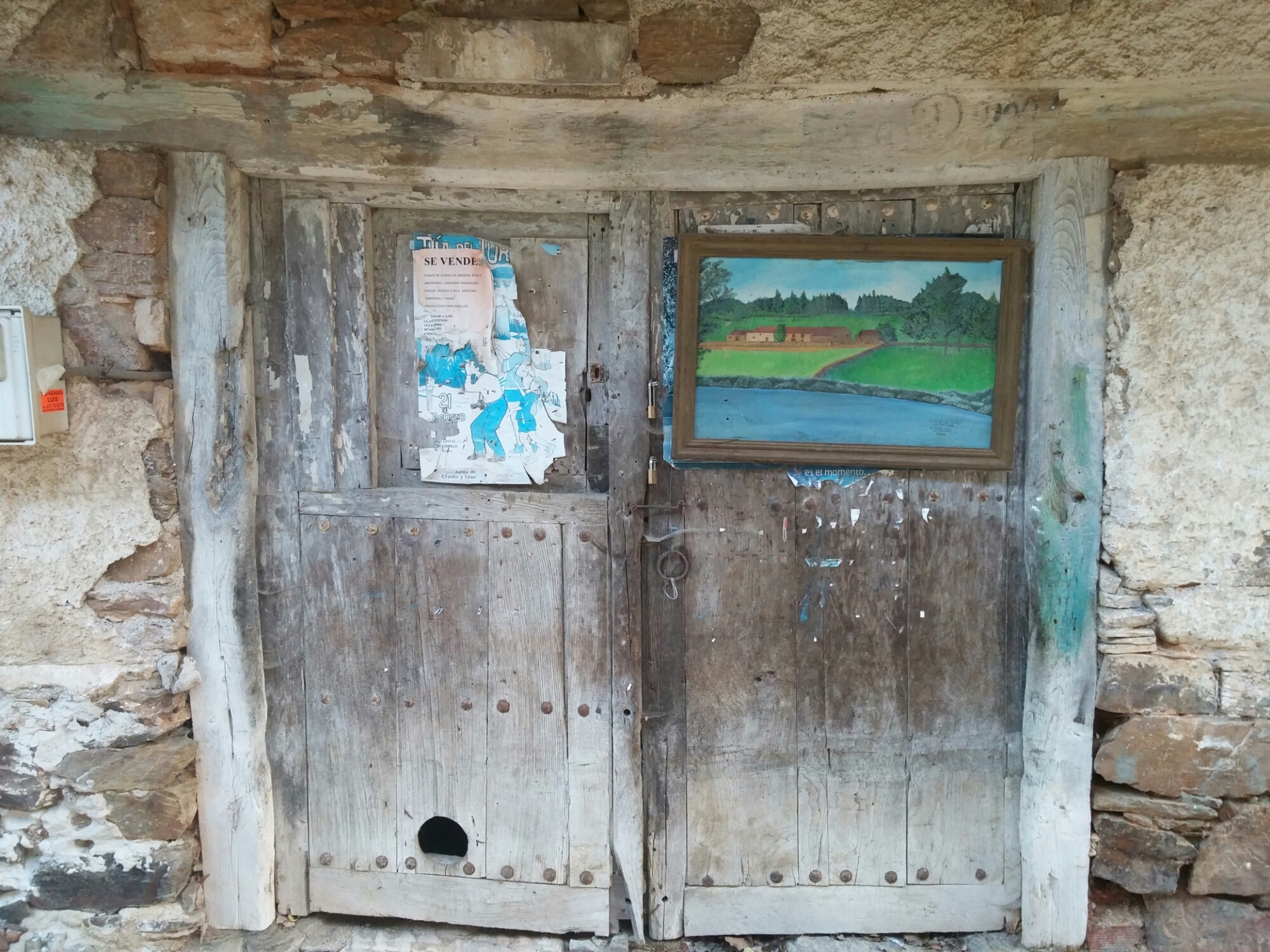 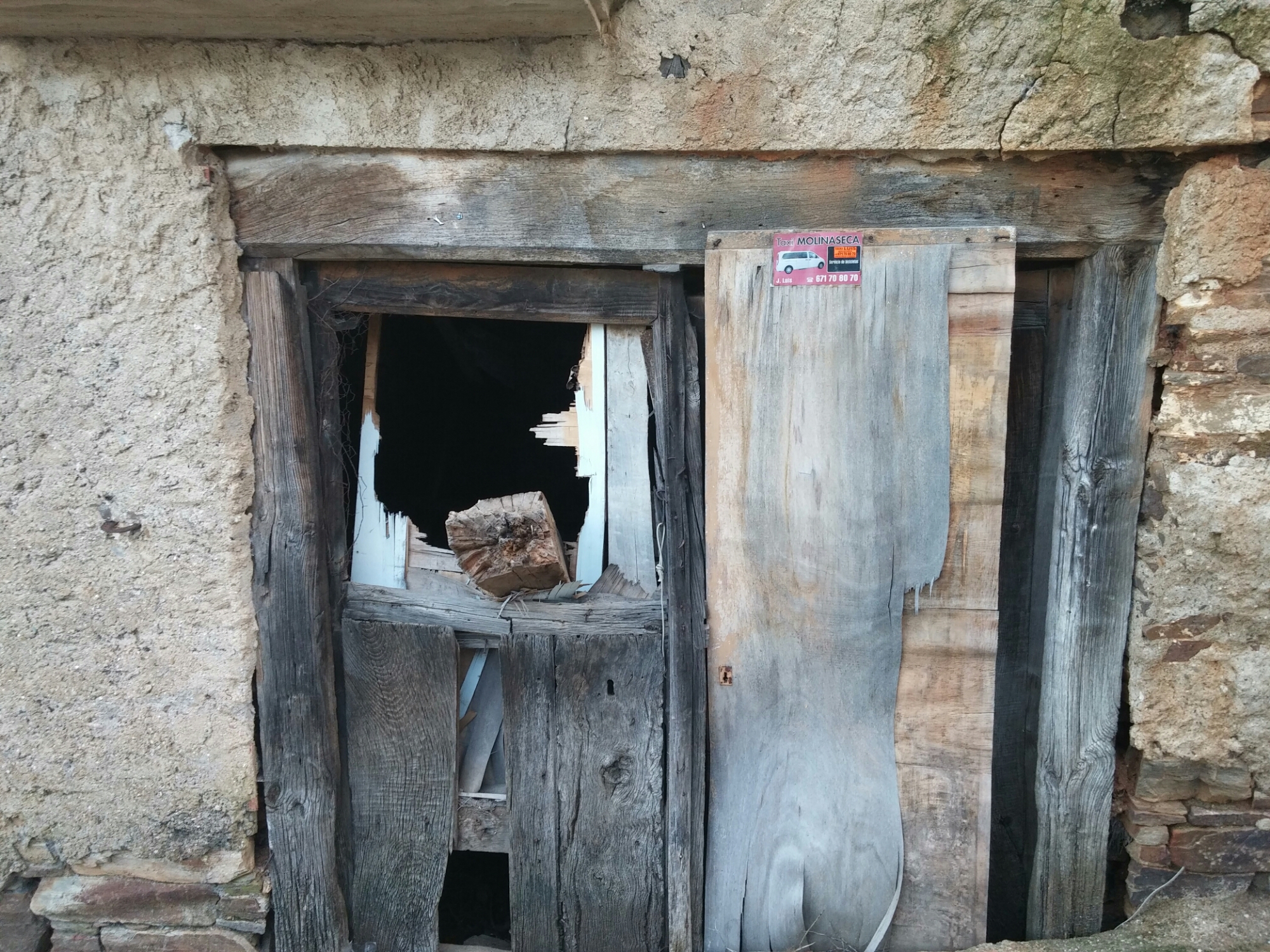