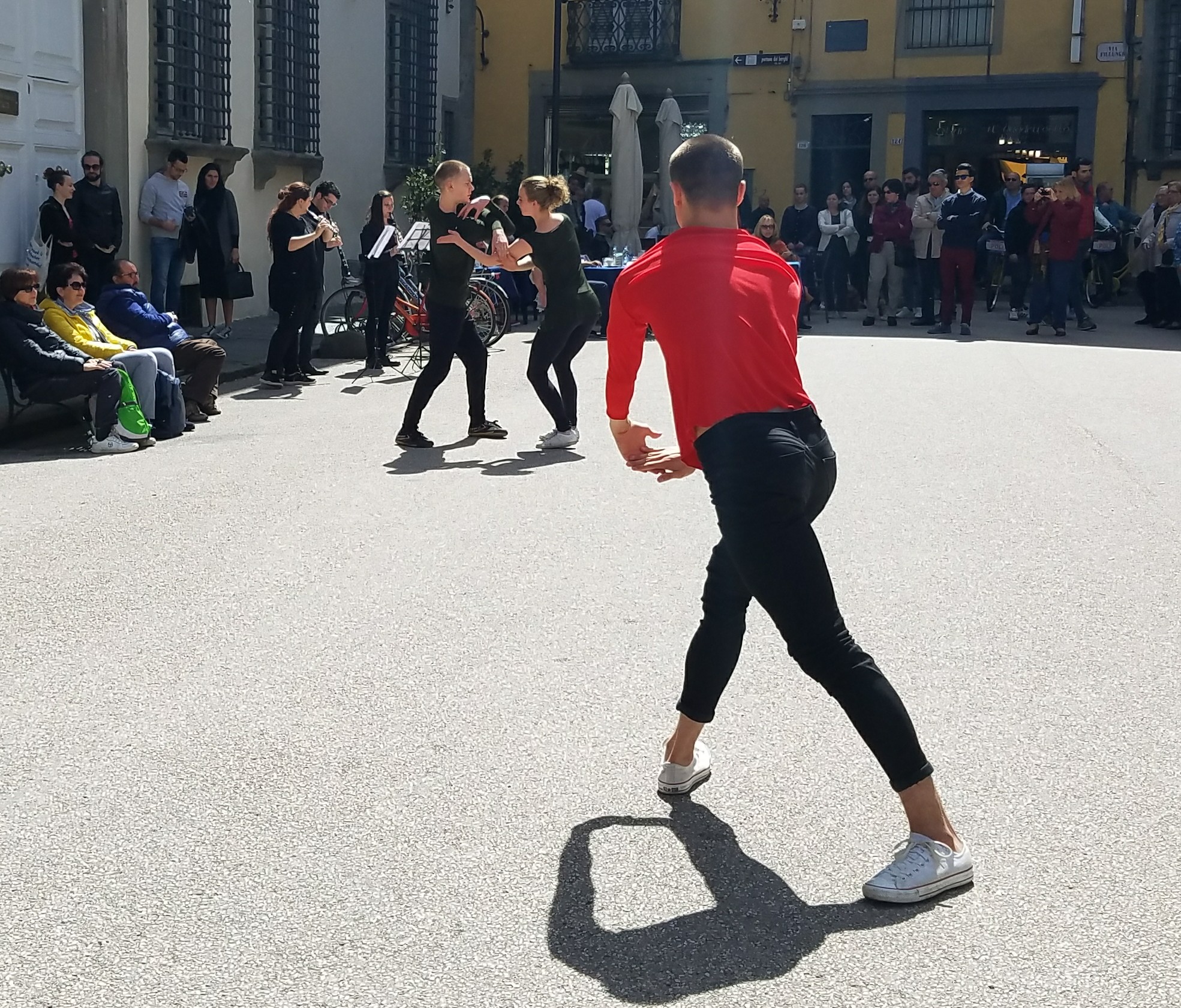 In a piazza in Lucca we came across these three young dancers dancing to classical music played by woodwind trio. Later Charlie saw another dance troupe. Street dancing seems to be a thing. We only saw one human statue in Lucca. I guess they are out of style? 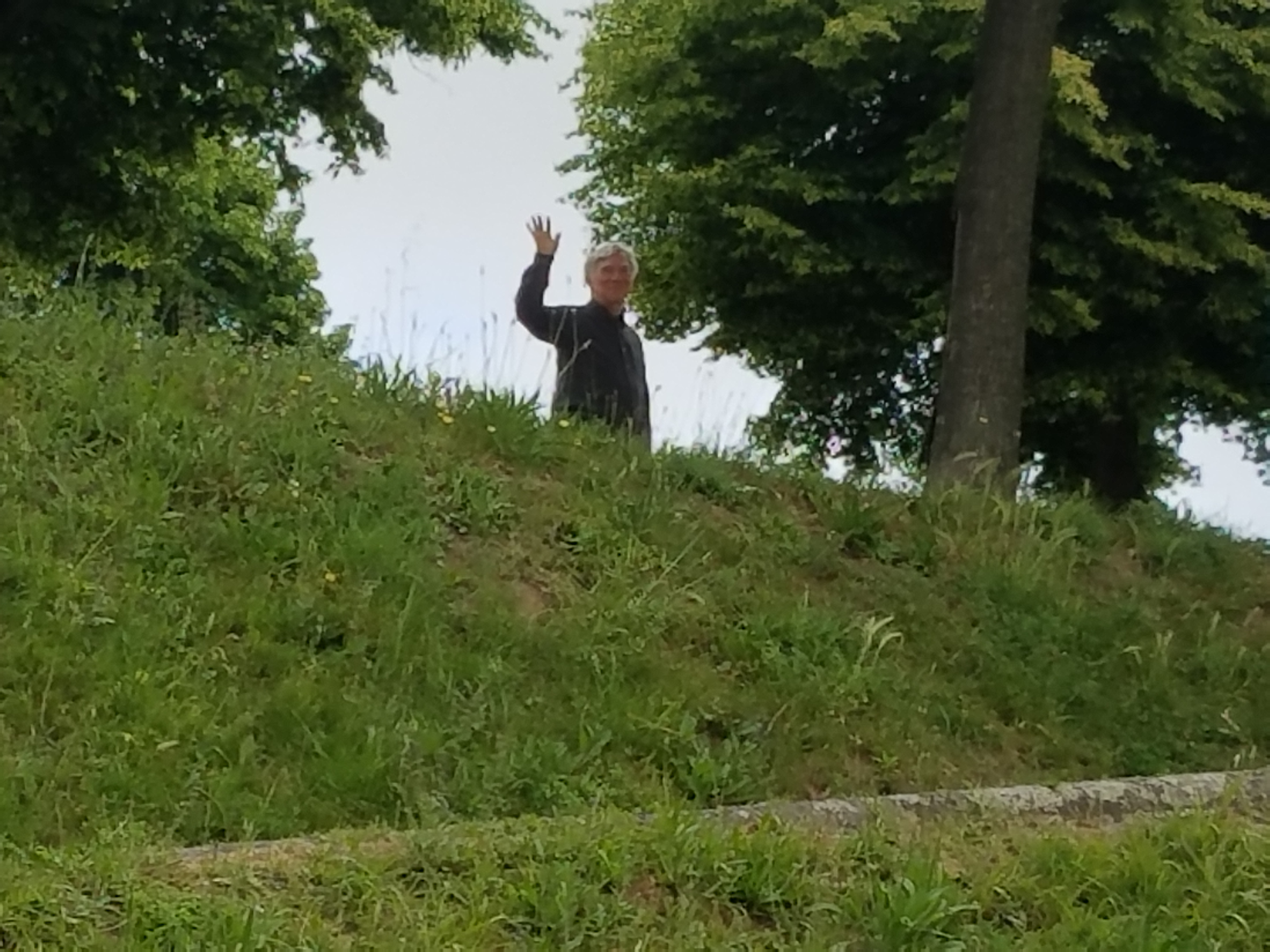 This morning, I went shopping outside the walls and Charlie stayed to walk on the wall. Here he is waving goodbye from on top of the wall. I zoomed in on him. He was pretty high above me, higher than it looks here. 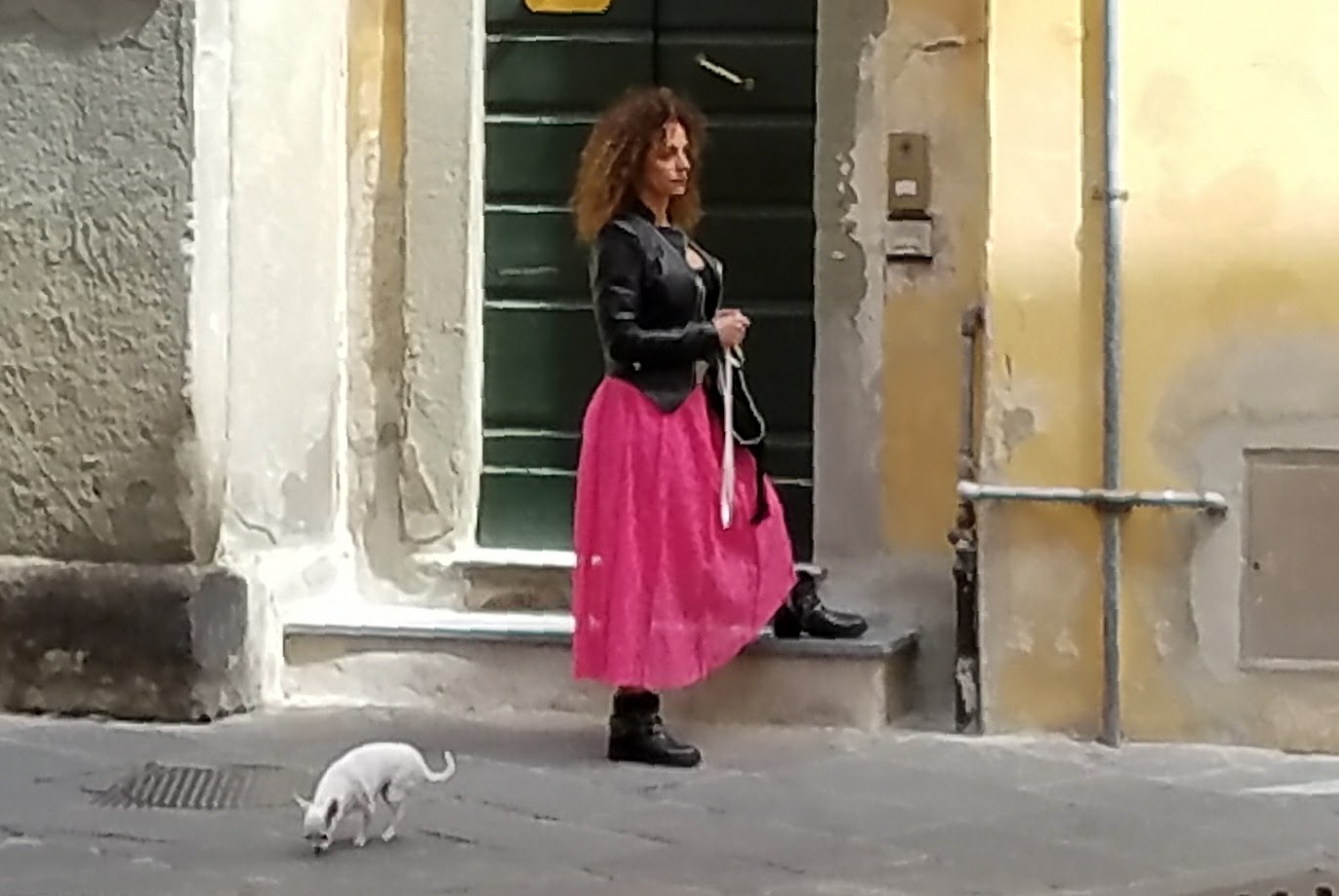 We saw this woman on the street. I’m not sure if she knew I turned around and took a quick photo. Too dramatic to pass up. 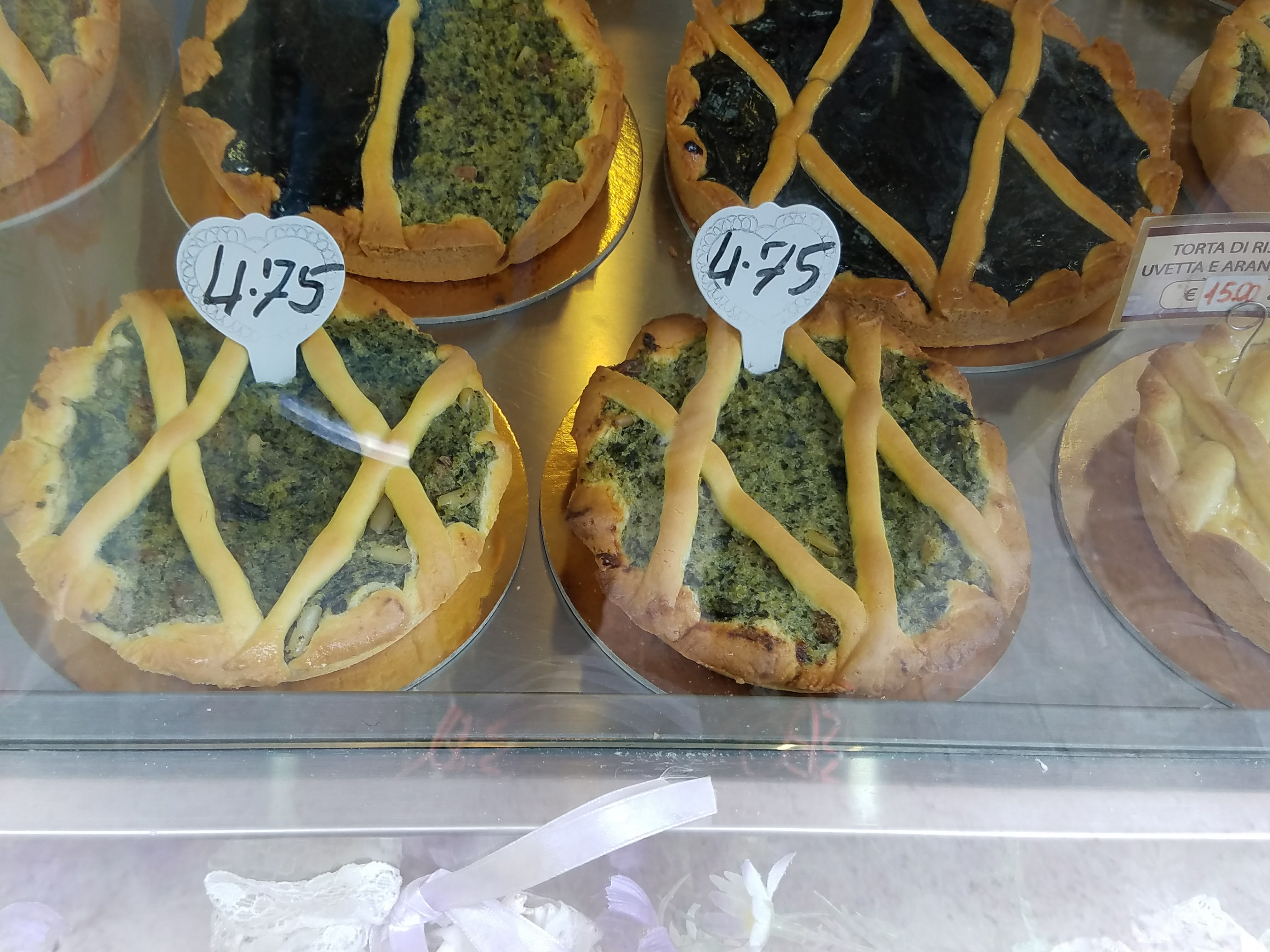 The other day, Charlie bought one of these at the bakery we go to every day for fresh focchacia. (We have become rather addicted to fresh focchacia.) Charlie thought spinach pie would be a good vegetable with our dinner. Later we sat down to eat it with our pork. When we tasted it we were surprised to find it was quite sweet. In other words, a dessert. Delicious but very un-vegetable-like. When we went back to the bakery we asked what it was and found out it is made from chard, not spinach and that it is a Lucca specialty.

We really like our apartment. We are renting from a lovely young couple, Elisabetta and Nicola. He picked us up at the train station last week. They have two young sons and a dog and a cat. The apartment spans three floors and has high ceilings so it is kind of like living in a tower. Each room (except bathrooms) is on a different floor. I’m not crazy about the stairs but I think they are good for me. Here are some more photos. Ours is the orange one in the first photo.

Lucca is a wonderful city for walking. We talked earlier about the wall. Lucca is one of the rare medieval cities whose wall is completely preserved all around. The wall has a wide smooth walking path on top. A beautiful 2.6 mile circuit with no cars and huge shady trees and views to amazing gardens, churches, villas. And mountains in the distance. Here is an album of photos we have taken either of the wall or from the wall walk.

The old town itself isn’t bad for walking. Cars are allowed inside but only those belonging to the people who actually live there. About 7500 people live inside the old town walls so that makes for a lot of cars. Most of them are not moving at any given time but you do have to get out of their way on the narrow streets.

About half a mile north of our airbnb is a several-mile-long walking path along a pretty river. No cars. Very few people. We know about it because it is part of the Via Francigena. That’s how we walked into town a few weeks ago. So, if you want to take a walk, Lucca has some beautiful, quiet, amazing places to walk.

Now for the paradox. Lucca is a terrible city for walking. If you actually need to walk to get somewhere, at least outside the old town walls any distance away from where we are staying, say to a grocery store or restaurant or market, the only way to get there is by walking along a noisy city street with lots of cars going fast. Usually there are sidewalks but often the sidewalks fizzle out or get obstructed by cars parking on them. We haven’t found quieter routes because almost any street that doesn’t end in a dead end is a busy car thoroughfare. I guess it is a vicious cycle. The worse it is for walking the more people take cars. And the more people take cars the worse it is for walking.

I should add there is a very nice street about 10 minutes from our apartment with a lovely little grocery store, pastry shop, bar, and fresh pasta shop that we can walk to on back streets that sometimes don’t have much traffic. And the wall walk is only about 8 minutes away as well. So, we are doing just fine. We certainly are doing a lot of walking here in Lucca.

I should also add that Lucca is probably a much better city for walking than any city of its size in the United States.

Charlie and I have been comparing the Via Francigena with Lucca with regard to walking. We walked through some of the most beautiful country imaginable and some of that on quiet country roads or farm tracks or forest trails with little traffic. We often had choices how to walk. The European Association of the Via Francigena (EAVF) has set up the new “official” paths which are different than routes used in past years. The EAVF tries to avoid the busy roads. The trade off is that the EAVF paths are often miles longer and often have no places to stop for coffee or food or bathroom. So, as in Lucca, there are amazing places to walk but they are out of the way and service-free. For the paths that have services, the cars got there first. They are busy, often narrow, roads which may or may not have a sidewalk or shoulder and we sometimes felt frightened walking along them. I read a book by someone who walked the Via and she and her partner usually chose the shorter road routes. She said she kept saying to herself “The Italians are the safest drivers in the world. The Italians are the safest drivers in the world.”  I said that to myself a few times. Just prayed they weren’t texting or talking on their cell phones.

We’ve heard that the Camino de Santiago had a lot more unsafe road walking in the past but much of that has been eliminated. The EAVF is working to eliminate the unsafe paths as well. Now they need to convince aspiring entrepreneurs to put a bar or two on the new out-of-the-way routes. And a few more B&Bs and hostels. That will make for many happy pilgrims. Of course, if the Via grows like the Camino, people will realize this is a great business opportunity. We heard that 10,000 people walked into Santiago Easter week!