We ate lunch at an outdoor table at Cerveceria Emilio our last three days in Sevilla.

Wynette: We are on our way home. Took a train to Madrid today and will fly to Albuquerque tomorrow. So we had to say goodbye to Sevilla this morning.

Charlie and I both had pretty bad colds the last half of the trip. It slowed us down a bit and we often crashed in the evening, instead of writing a blog post, but we still had a great time. There is more we want to write about. We plan to do some more blog posts about the trip after we get home so if you check back in a week or two (or more?) there will probably be a few more posts.

Last night we did our last paseo (evening stroll) in our neighborhood of Los Remedios. All over Spain, and probably Europe, people come out of their houses in the evening to stroll and socialize. There’s a perfect mixture of old, middle, and young people. All ages. Lots of young children playing with each other. If you click on the above photo to blow it up, count all the baby strollers.

Wynette: A few days ago Charlie and I did another Segway tour. Three hours this time. We were the only ones. A private tour! We told our guide, Jose, we’d been in Sevilla for over 4 weeks and had seen most of the main sites so he was thrilled to take us up north to places he doesn’t usually get to go, where tourists don’t go so much. One of the sites we saw was an old monastery. There were some modern art installations there. A nice combination of the old and the new. You probably can’t miss the art in the photo below.

We rode our Segways for 10 miles. We might write more about the tour (and Jose) after we get home, but wanted to post these two photos. After we got back to the Segway office at the end of the tour, we asked Jose if we could take his picture and, at that, he orchestrated for us to get back on our Segways and for another person at the company to take a photo of all three of us.

We were all saying “patata” while his helper was snapping pictures. “Patata” is what the Spanish say to make a smile for a photos. As our airbnb host explained to us, the Spanish don’t say “cheese” because the word for cheese in Spanish is “queso”  (kay-so) which sort of makes you frown. “Patata” (pah-ta-ta) is the Spain word for potato (as opposed to “papa” in Latin America).  Something about a bunch of people saying “patata” together makes you want to smile.

Wynette: Since I enjoyed the first week of classes at the CLIC school, I decided to do another round this past week. Monday was a Spanish national holiday (I never got clear what it was for — the Spanish have lots of holidays) so the class only met Tuesday through Friday … from 1:30 to 3:10. The same as before: Conversation and Grammar Practice. Those four days went by so quickly. It was another great class. The teacher’s name was Juande. Like my first teacher, he was fantastic: interesting, sharp, energetic, and lots of fun. Doesn’t he have a beautiful smile and a beautiful face?

There were four of us students.  Louís and Urs were near my age (Louís might have been a few years younger). They are both from Switzerland, but Louís speaks French and Urs speaks German. The other student was quite young (20s?), from Germany, named Antonia.

It was so much fun to get to know Louís and Urs and Antonia while we slaughtered the Spanish language (even though we tried our best) and Juande tried to set us straight.

I signed up for classes using the name Dorothy since that is the name on my passport (my first name). So, I just used the name Dorothy in the classes.  It seems a lot easier for the Spanish people to understand Dorothy than Wynette.

Charlie: Actually Christy and I had visited the Mezquita on our trip to Europe in 1969, a mere 46 years ago. I remember being much more impressed with it then than I was this time. Things are more amazing when you are 21. We took a taxi, but I am sure that I would have enjoyed observing present-day Cordoba on a walk from the train station to the Mezquita more than I enjoyed touring the Mezquita a second time. This feeling is not about the merits of the Mezquita or how anyone else should plan their travel but about how Wynette and I like to travel these days.

I did enjoy exploring the panorama: 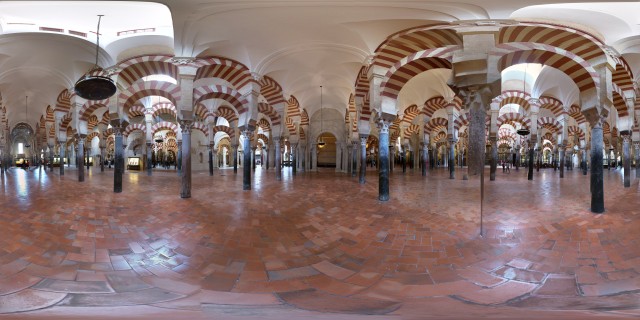 modes on my camera. The spherical one looks great on the phone with the right software to display it. 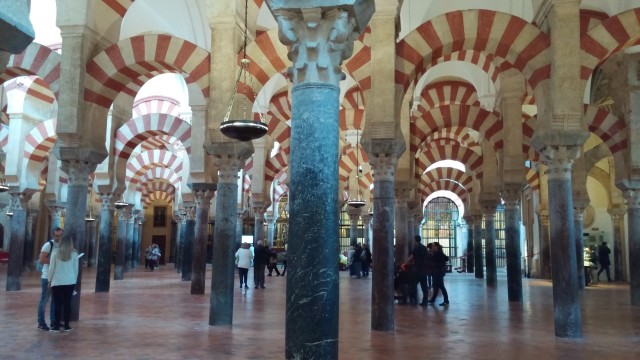 Charlie: The top sight in Cordoba is the Mesquita, a huge mosque built in 785 and extended several times in the following centuries. Cordoba was reconquered by the Christians in 1236. In 1523, after three centuries of admirable restraint, and over the opposition of the town council, the Bishop of Cordoba convinced King Charles V (no relation to Charles Crowley)  to let them knock out a couple hundred of the columns and build a big cathedral right in the middle of the mosque. Scroll a little down on this page to see a 3D representation.

The cathedral is impressive but so much like a hundred others that I won’t include any photos. To his credit Charles V (this time possibly a relation to Charles Crowley) regretted his decision and said, quite eloquently, “You have built what you or others might have build anywhere, but you have destroyed something that was unique in the world.”

Of course, you can see they might have been pretty angry about the Muslims invading their country and occupying it for five hundred years, that is a legitimate grievance but that had ended three hundreds years before.

The story seems so contemporary to me. Secular official concedes to the demands of an interest group even though he knows it is wrong to retain support of the interest group for political reasons. 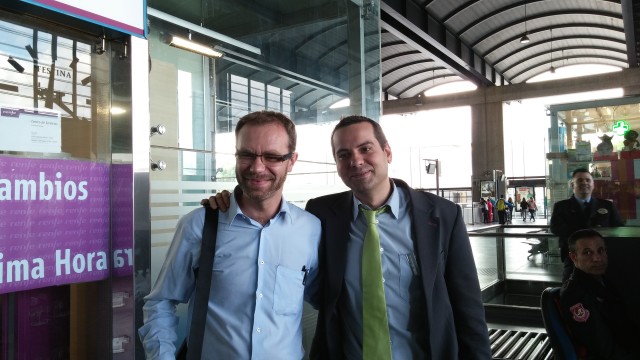 Charlie and Wynette: No chocolate factory tour but it does give golden agers 40% off on train tickets. We used it to go to Cordoba. We went to the train station to buy the return ticket and realized we had left the tarjetas doradas back in Sevilla.

The cards would only save us about 15 euros each but we went into the information place to see if there was a record of it. The nice man on the right tried for 30 minutes to get it to happen, assisted by the nice man on the left, but for all their efforts, no go. It seems that the tickets are not recorded nationally but each train station gives out its own.

Both men clearly worked past the end of their shift — note how our guy had removed his standard issue tie and jacket — but they kept on, cheerfully, trying to make it happen and were very apologetic when they couldn’t.

Unfortunately we missed the next train trying to get this done so we took a (much less expensive) local that was fun and we did beat the next, next, fast train by 30 minutes. Even the local got up to 150 kph (90 mph), but it stopped more. The fast train tops out at 250 kph (150 mph).

The man went on about how beautiful Cordoba is (it was) but confided to us that things do not happen quickly in Spain. Good to know.

Wynette: Pat and I were on the beach when a small wedding party showed up. Well, it appeared to be a bride and groom and a photographer and a couple of others. We could see that the photographer was telling the bride and groom what to do for the photos. Then Pat figured out that it wasn’t really a wedding party at all. They were probably filming a commercial or something like that. Pat is from LA so she’s an old hand at spotting this sort of thing.

We heard that the Havana, Cuba, beach scene with Halle Berry in the James Bond film Die Another Day was filmed at this beach. 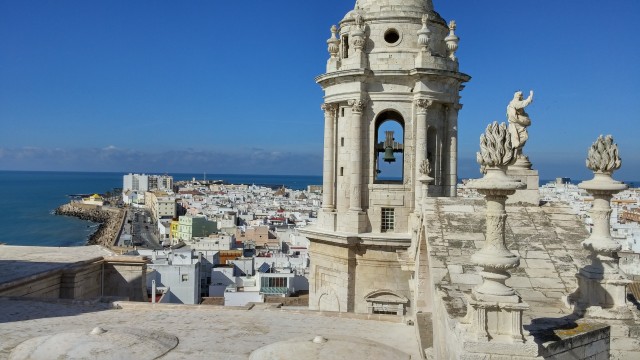 Charlie: Wynette and I walked up to the top of the bell tower of Cadiz Cathedral. The way up is a circular ramp rather than steps so it is easier to climb. Great views of the city. Here is one from another direction, looking back at the narrow isthmus that connects Cadiz with the mainland: 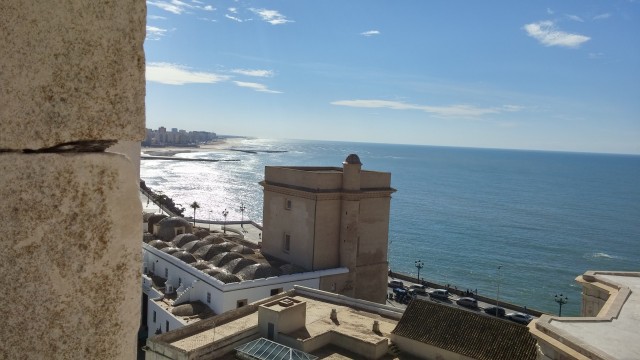 The first time only Charlie went up the bell tower. Here are Pat and Wynette sitting in the cathedral cafe waiting for me to come down. Wynette is taking a picture of me up in the tower. 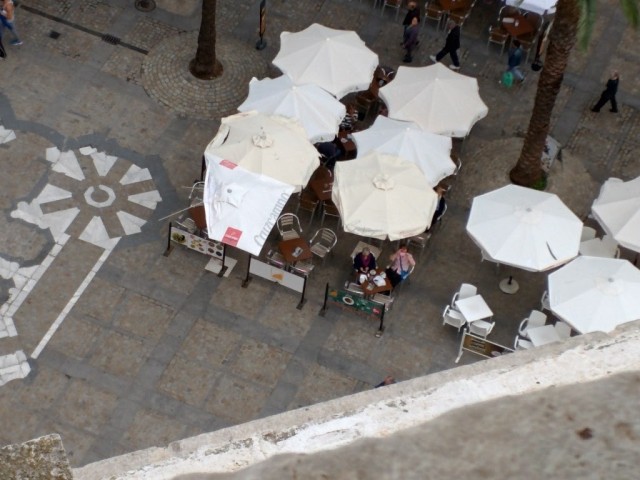 Charlie and Wynette: Cadiz is a coast/beach town (about 124,000 people) 60 miles south of Sevilla. It is on the south Atlantic coast of Spain. The train takes an hour and 45 minutes and makes 10 stops between Sevilla and Cadiz.

We have been lazy and leaving out the accent that should be over the “a” in “Cadiz”. It is pronounced CAH-deeth, with strong emphasis on the “CAH”.

We read that Cadiz is the oldest city in Western Europe and Columbus set sail from here on his second voyage to the Americas.